This is a newer project of mine, still in the setup and engine stages. The game currently has two modes– an infinite runner/sidescroller (pictures above) and a strategy platformer (images coming soon). Being a newer project, I’m not quite sure what I want to do with it yet. Do you have any ideas/suggestions? Try out what I’ve got so far and let me know here.

(Windows may warn you about the file, this is simply because it’s an EXE from the internet.) 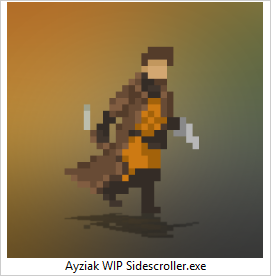